History of the Cruiser (Part 1) 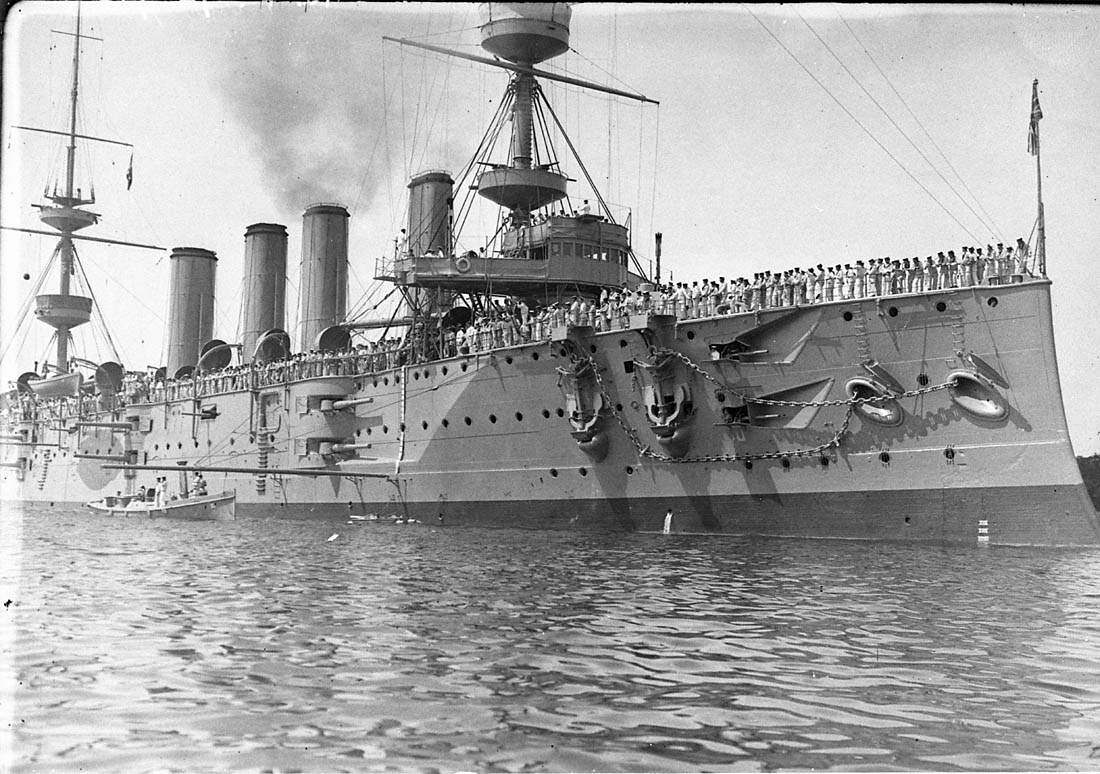 Originally, in the days when ships used sails for propulsion, the term “cruiser” was used somewhat loosely. Frigates and other smaller ships were classed as cruisers, based on the idea that they often had to ‘cruise’ independently from the main fleet for long periods. Once sail was replaced by steam and ships started to require significant armour protection, the definition of what constituted a ‘cruiser’ became somewhat more narrow. By the late 19th century the term was generally understood to mean a warship that was of medium size (ie. bigger than a destroyer and smaller than a battleship or dreadnought) and which had a balanced armour layout and strength, as well as being faster than the average battleship but slower than the fastest destroyer. Its armament would consist of a variety of guns and in the late 19th century might include (in Royal Navy cruisers) 6-pounder, 6-inch and 9.2-inch guns. The armour was fairly modest usually being in the region of 9-inches around the waterline with with an armoured deck of perhaps 3-inches. As naval guns became more powerful the armour was increased to offer better protection.

So, for example, the first truly armoured cruiser in the Royal Navy, HMS Shannon (laid down in 1874) had 9-inches of armour around her waterline, with a 3-inch armoured deck. She still had sails though! Later ships such as the Imperieuse (1886) and Warspite (1888) had similar armour layouts and these were the last armoured ships of the Royal Navy to be powered by sail.

In the late 19th century, Britain still had a far-flung Empire and so cruisers were an important part of the fleet, needed to guard important trade routes between Britain and its overseas territories (colonies). In fact, there were three classes of armoured cruisers, First, Second and Third Class protected cruisers. These differed accorded to their tonnage, armament and armour. They all lacked proper side armour but did have a steel deck protecting their engine and boiler rooms as well as the vulnerable magazines. However, Britain’s rivals, although unable at the time to match her mighty industrial power (reflected in the size and firepower of her navy), did not wish to get left behind in this arms race. So, they developed large commerce raiders to challenge the Royal Navy’s dominance of the high seas. This required Britain to respond in kind by increasing the size and capabilities of her First Class protected cruisers.

In fact, some of the resulting cruisers even surpassed contemporary battleships in terms of size (displacement). For example, the Powerful and the Terrible (both laid down in 1895) had a displacement of 14,200 tons. For example, the Royal Sovereign class of 1889 had a displacement of 14,000 tons. Both ships had 6-inch deck armour and were fitted with two 9-inch guns and twelve (later upgraded to sixteen) 6-inch guns.

By the time the 20th century came around, Britain’s navy was still the greatest in the world. However, Germany wasn’t happy with the status quo and decided that a change in strategy was required if it was to have a chance of challenging the dominance of the Royal Navy, especially in the North Sea and Atlantic waters. It decided to move on from the strategy of developing commerce raiders and develop ever more powerful cruisers and battleships of its own. In 1899, the German Imperial Admiralty Staff (Admiralstab) replaced the Imperial Naval High Command and thus was set in motion another phase in the arms race between Germany, the rising star of industrial Europe and the old but powerful British Empire.

Rear-Admiral Alfred von Tirpitz was the German State Secretary of the Navy (1897-1916) and his great desire was for the German Navy to rival, indeed surpass, the Royal Navy. As a direct result of policies advocated by Tirpitz, on 10 April 1898 the first Navy Bill was passed by the Reichstag which authorised that a a fleet of 19 battleships, 8 armoured cruisers, 12 large cruisers and 30 light cruisers to be constructed by 1 April 1904. In terms of allowing Germany to challenge Britain and it’s Royal Navy this measure was inadequate, to say the least, but it did get a response from Britain. So it was that Britain set about designing and building it’s second generation armoured cruisers. These would end up having better armour protection using a recent innovation, that of cemented steel plate armour. They also benefited from the new water-tube boilers which meant that significant weight was saved and this allowed the re-introduction of belt armour without speed being adversely affected.

So it was that in 1905 the first ships of the Minotaur cruiser class were laid down. These had a displacement of 14,600 tons, had four 9.2-inch guns, ten 7.5-inch guns (an improvement on the previous 6-inch guns) and could make 23 knots compared to the 22 knots (41 km/h; 25 mph) of HMS Powerful. Eventually, the desire for ever faster and more powerful warships would give rise to the battlecruisers. The pace of change was rapid and the first of the battlecruisers, HMS Invincible, was completed in 1908, the same year that HMS Minotaur was. HMS Invincible was so powerful that immediately all existing armoured cruisers became, in effect, obsolete. With her eight 12-inch guns and a top speed of 25 knots she presented a formidable threat to all lesser ships. However, with a displacement of 17,200 tons the Invincible Class (Invincible, Inflexible and Indomitable) were almost as large as the Dreadnought class of battleships and in fact were equipped with the same 12-inch guns. Subsequently, despite their thinner armour, they were later re-classified as capital ships rather than cruisers.

Following the introduction of the battlecruiser, the old armoured cruisers were not only obsolete in terms of armour and firepower, but also in terms of speed. Britain still needed to protect it’s vital trade routes and so new classes of cruisers were needed. Also, the development of faster and more powerful destroyers even before the introduction of the battlecruiser meant that capital ships (battleships and dreadnoughts) were ever more vulnerable. So six Scout classes of turbine-driven cruisers were built between 1903 and 1913. In order for them to keep up with the fleet and counter the new destroyers they had a displacement of up to 3,400 tons, a speed of 25 knots and for firepower had lighter guns and two torpedo tubes.

Armour consisted of 2-inches at the waterline and 0.625–1.125 in deck armour. Armament consisted of

The ship had a complement of 289 officers and crew.

However, the pace of technological developments meant that even these ‘fast’ cruisers were overtaken by the latest battlecruisers and destroyers. So, along came the next type of cruiser, one that combined oil fuel and turbines in place of coal-fired boilers. However, the old coal bunkers had offered some extra protection so the new Arethusa class of cruisers gained extra armour, with 3 to 4-inch armour belts and 1-inch deck armour.

Initially described as light armoured cruisers they simply became known as light cruisers. They were increased in displacement and armament almost as soon as they had entered service and by 1918, displacement had increased to 4,650 tons, speed to 29 knots and main armament was increased to six 6-inch guns. Under the London Naval Treaty of 1930, light cruisers were officially defined as cruisers having guns of 6.1 inches (155 mm) calibre or less, with a displacement not exceeding 10,000 tons.

This brings us to the end of Part 1, with Part 2 focussing on the First World War (1914-1918) and its impact on the development of the cruiser.